Virgin America is suggesting that they intend to offer service to Chicago’s O’Hare airport in early 2011. As part of their announcement of a major aircraft purchase – 40 firm orders and 20 options on Airbus narrow-body planes – the carrier also noted that “We still have a lot of places to expand, but Chicago remains high on the list, as we hope to inject some healthy competition into a market that is still dominated by just a few legacy carriers.”

This may sound all to familiar to fans of the carrier and it should. Virgin America suggested that they’d offer service to Chicago in 2008 as well but ultimately chose not to, citing the inability to acquire gates at the airport. Of course, there were gates available but they were in the international terminal, not the main terminal complex. That would mean an extra tram ride to connect to the main airport facilities in many cases, something that Virgin America did not want to deal with. This time around it is not clear that there are specific gates available to the carrier in the main terminal complex, but there is a caveat in the negotiations. 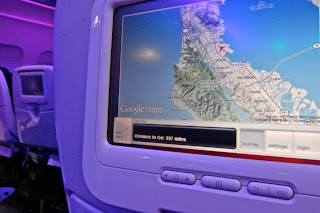 The airline is negotiating for an “economically viable” deal with O’Hare officials. In other words, if they come up with anything that they don’t like about the negotiations – including the gate arrangements – they can walk away form the discussions. Again.

On the plus side, passengers will get to use an awesome new in-flight map system that Google has developed for the airline’s RED in-flight entertainment system. It shows much higher levels of detail and permits panning, zooming and other features through the touch-screens on the plane.