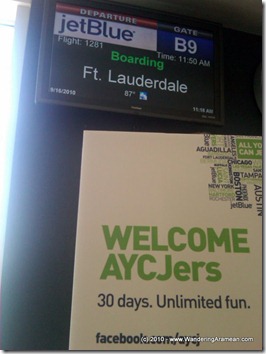 Today’s itinerary, JFK – Richmond, VA – Ft. Lauderdale, FL – White Plains, NY, was crafted with a singular goal. It turns out that there are very few domestic JetBlue airports that I have never flown to and I’m using the All You Can Jet pass to address that issue, among other plans. Of the five remaining on my list two (RIC & HPN) were on today’s itinerary. Add on the one I got Sunday (SRQ) and the one I’ll get this coming Sunday (SJC) and I’m dangerously close to crossing the finish line on that challenge.

Even though that was the ultimate goal of today’s flights I found that it wasn’t what I was ultimately focused on during the flights. For two of the flights I was focused on sleeping, attempting to rectify the misery inflicted by the redeye I took in from Sacramento last night. But I also found myself chatting with gate agents and flight attendants even more than I normally do, which is a lot to begin with.

The gate agents in Richmond were incredibly friendly and interested enough in my travel tales that I ended up chatting through the whole boarding process and was the last passenger to get on the plane. Many thanks to Matt and the whole crew there for making my brief stay in Richmond so enjoyable. Plus, I got to fly on the JFK-RIC route before it is cut later this fall so I’m happy about that. The flight Richmond to Ft. Lauderdale offered up yet another new travel experience for me. The two women working in the cabin are spitting images of each other. Turns out that they are a mother-daughter pair. They’ve been paired occasionally before when picking up segments here or there but this was the first time they ended up on a full trip together. Very cool to see them working together and enjoying themselves.

As an added bonus it was the same crew from Ft. Lauderdale to White Plains so I got to actually see them in action versus the initial flight that I slept through.

Wrapping up with the stats for my AYCJ adventures so far: