Philippine Airlines is now offering the FLY ASIA PASS, an unlimited flight pass, similar to the BluePass announced by JetBlue yesterday. The Fly Asia Pass is valid for a 7 week travel period, beginning on 15 August 2011. In addition, the pass can include positioning flights from Europe or North America to the Philippines to get started. And, at $270 for economy class or $1070 for business class it seems like a great deal. Seems like one.

The most significant drawback of the Fly Asia Pass is the taxes and fees that will be assessed on the pass flights. More than just the actual taxes and fees, Philippines Airlines will also be assessing "surcharges" for each segment flown. And the surcharges are severe in some cases. 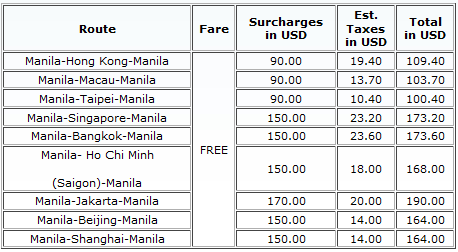 Those numbers will add up pretty quickly. That said, they’re actually not all that dissimilar to the taxes paid for international travel in the Caribbean area which JetBlue BluePass customers would be subject to, but these are not government-imposed which is unfortunate for customers.

The other significant limitation of this Fly Asia Pass is that all flights must be booked within two weeks of purchase. Changes will accrue an additional $50 fee per transaction.

The pass is a reasonable deal if you’re going to be in the region or if you want to fly around the region a lot, but only really if you can fix your travel dates and you’re willing to pay the fees. With standard return fares at around $300-400 on many of the regional routes, if you can commit to the timing of a few trips this pass can be quite reasonable.

Like most crazy deals there will be some winners and some losers. This deal seems to have options for both.