Some airplane seats which I hope never fly

Looking back at my week in Hamburg for Aircraft Interiors Expo 2014 it occurs to me that I took a whole lot of pictures of airplane seats. Part of that collection made it on to the Today in the Sky blog on USAToday.com this morning. Alas, a photo slideshow, while pretty, doesn’t really give me a lot of words to talk about all the options out there. Fortunately I have the space here to do so. And, upon further review of all my photos, I realize that there are some very, umm, interesting ideas out there from the seat and aircraft manufacturers. Also, it is important to note that most of the seats shown at AIX are the ones they think could actually sell; that means there were probably worse ideas being tossed around in brainstorming sessions.

And so here are the three seats which I hope to never see on board a commercial flight, one each from the three main classes of service.

ZIM has a new-ish slimline seat it was showing off in a 28″ pitch layout. I suppose my real objection is the 28″ pitch being shown, not the seat itself. It actually looks reasonably comfortable (the vendor wouldn’t let me sit in it to try it out) so long as you have enough space to get in and out. The guy I saw sitting in it while I was taking photos didn’t really fit so that’s a reasonable “no” vote in my book. ZIM mounted the tray table using a single bar in the center which comes up from the base of the seatback in front rather than the traditional two posts on the side. I’m not sure if that reduces weight, increases perceived legroom or just looks cool. Either way, I’m not too excited about the future of the slimline seats I saw at the show. And this is a pretty good example of why.

Sogerma’s Celeste seat was actually rather comfortable. For me. The seat is built as a single piece rather than the traditional three parts (seat back, bottom cushion, leg rest). So when you recline the whole thing moves together, akin to a rocking chair. And that’s great if it fits your body shape. I happen to be darn close to average dimensions so it fit me reasonably well. Unfortunately, however, the thing about averages is that most travelers are far from it. During the post-conference podcast episode there was an interesting discussion about the average sizes and how to make seats fit those customers. One of the five in our group was rather shorter than the rest of us; her views were definitely from a perspective I rarely consider. But I have to believe that a fixed form seat like this would be quite challenging for her. Not because it is a bad seat, but because it seems likely to only really work for average-sized passengers. And there really aren’t enough of those flying.

On the plus side, the seat can be offered with widths ranging from 18-22 inches and pitch between 40-45 inches. And it will include a 35-45 degree recline and IFE screens up to 18 inches. All good metrics, assuming you fit the mold.

Stack ‘em, pack ‘em, and rack ‘em. It worked for the ATC folks in Die Hard II so why not for airline passengers? Sogerma figured out that it can decrease the default pitch in a lie-flat business class seat by about 4 inches by including a slight overlap in the foot wells for the two customers in the paired seats on its Equinox product line. Both are fully flat but the seat on the right is raised above the seat on the left. Even more incredible is that Sogerma believes it is possible to go 2-3-3 with this layout, not just 2-2-2. There would be another low seat on the outboard side of the high one. Getting in and out from the middle would definitely be a challenge in such a layout.

The raised seat did not bother me too much. It was not too high (reminded me of Singapore Airlines’ A380 Suites in bed mode from a height perspective) and I could get in and out reasonably enough. My problem with the seat is that it simply didn’t have space for me as a passenger. 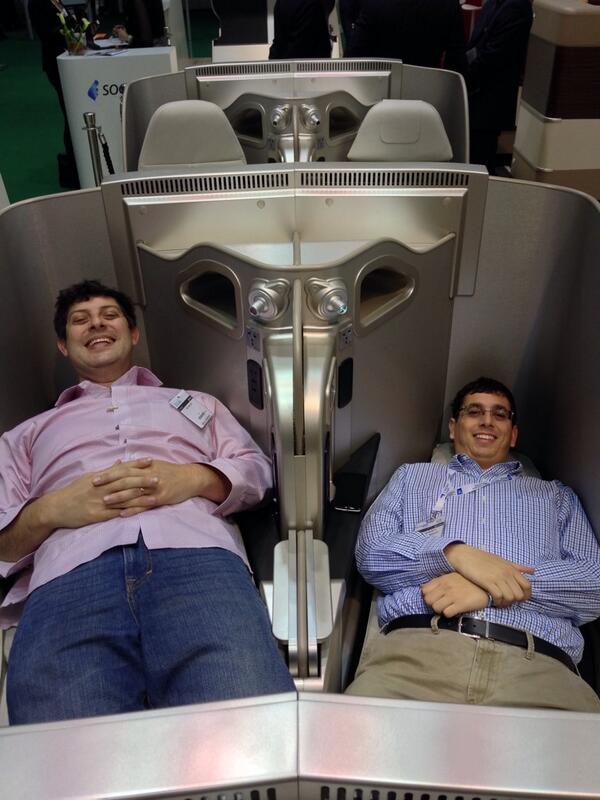 That’s me on the left laying down in there and it was really tight. Maybe extend the pitch a bit more and it would be better but then you’re back to what the airlines didn’t want: taking up more space for the seats.

I give Sogerma bonus points for a creative approach to the problem. I’ve certainly dreamt of bunks/pods in economy for lie-flat on long-haul trips and I’m sure others have, too. Going vertical is a great way to maximize space efficiency on the plane. But I also feel that this version didn’t quite hit the mark.

Okay, so I said only three seats. Turns out there is a fourth: the Thales Immersive business class concept seat. Yes, it is just a concept and they don’t ever expect to sell it as shown at the show. And there are some neat things about it, I suppose. But I’m still trying to figure out what exactly the concept is that they were aiming for. The seat was comfortable enough, I suppose. And there were some cool features like surround sound in the headrest that couldn’t really be heard outside of the seat or the vibrating bits of the seat tied to the score of the movie you’re watching (explosions on screen make the seat shake). Plus they integrated the eye-tracking controls that they first introduced last year. I actually managed to select a move from the AVOD kit without touching anything.

But there was a lot more that they hoped to include in the ecosystem surrounding the seat. Thales expects that it will be tied to an app on your phone and triggered via an NFC connection. Place your mobile on the control pad and the airplane will “recognize” you. That means displays and colors will automatically adjust to your preferences. Pretty cool, I suppose. But they also want to integrate it into the rest of your travel experience, suggesting restaurants at connections and other similar things. Cool, but it also means tracking at a level I’m not so sure I’m happy about. Plus, I don’t know that they’ll do any better at that than the myriad of other options available who are focused only on such.

Finally, there’s no way that huge screen just floating out in the middle of space is going to meet certification requirements. But having it tilt down as I reclined my seat was nice.

Of course, in 5-7 years things very well may be a lot like this.

Coming tomorrow (hopefully): The seats I DO want to sit in.