The life of a tuna at Tokyo’s Tsukiji market

OK, fine. It is already dead by the time it gets to the market, so not much of a life. It is still rather amazing to see just how quickly a tuna gets processed at Tokyo‘s Metropolitan Central Wholesale Market, better known by its location name, Tsukiji. The fish are brought in from the boats early every morning. In a matter of hours they are reviewed, purchased, transported, sectioned and sold again to buyers who will be serving them for lunch or dinner later that same day.

I visited the market back in March of 2009 and when I got to Tokyo this past weekend that was really the only absolute "must-do" of my plans. I’m incredibly glad I did. The process for getting in to the auction part of the market is a bit harder now. You have to show up early and apply for one of the 140 passes that are issued each day. Thanks to jetlag and being lost I missed out on that part of the trip so I have to rely on my videos from last time for the auction bit.

Once the auction concludes the fish is loaded on a cart and wheeled through the narrow aisles of the market to the stall of their buyer, and I was awake and in the right place this trip to capture the experience. 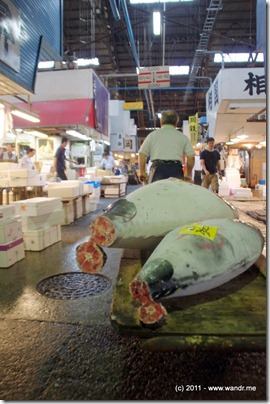 From there the fish has to be cleaned and sectioned. This is the most impressive part of the process to me, mostly because the tuna are so huge and so expensive that any waste can mean lost money on the transaction. Plus the tools these guys use are awesome. It is not your typical chef’s knife that is going to be able to cut a 200 pound fish into pieces. Eventually a second set of buyers (like the guy in the blue hat) get involved, taking the sectioned pieces for their individual shop, restaurant or secondary processor. It is amazing just how quickly this whole process happens. It is a matter of 60-90 minutes before the fish is moving out the door and on its way to your stomach.