Ah, the joys of mergers and the ability to drop massive capital expenditures into “one-time event” classifications so they don’t hurt the balance sheet so much. This time around it is American Airlines‘ turn as the company announced a $2 billion investment this week, focused on fleet standardization and upgrades. And to read the press release you’d think these are amazing changes which launch American to the forefront of passenger experience. Alas, reality might be just a wee bit different there. 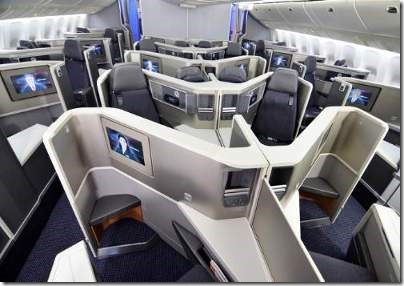 The money quote from CEO Doug Parker is solid:

Now that we have the network to compete globally, we’re going to deliver a product that’s better than our competitors. Refreshed cabins and clubs, modernized ticket counters, improved technology and new aircraft are further examples of how American is ‘going for great’ – providing our outstanding team members the tools they need to deliver a great experience for our customers.

But what does that really mean?

The coming cabin upgrades are mostly a “me-too” approach to business class, where most of the money is likely focused. For several years now the American Airlines business class seats have trailed competitors Delta and United Airlines in getting to an all-flat business class offering for long-haul flights. Only just now has the carrier committed to making that move. For the 777-200s the seat is a custom-designed option which American hold a patent on. It offers direct aisle access at every seat while not a herringbone-style layout. On the 767-300s it is more of the Thomson Aero Vantage seat which offers a staggered layout to provide direct aisle access. The announcement also confirms that the 757-200s will receive fully flat seats though details on exactly what the seat will be were not offered. The company does not promise direct aisle access for those planes which suggests the B/E Aerospace Diamond seat is a possibility; this is the same seat the carrier has on its A321T for transcon business class. The Thomson Aero seat is also a possibility, though the seating density would be rather lower with that model.

For economy class passengers the word is a “refreshed” cabin, though scant few details on what that actually means.

On the short-haul front the US Airways A319s are set to see an interior revamp as well. The announced plans include 24 Main Cabin Extra seats, a full row more than what is available with the current AA A319 layout. No word on how many first class or regular economy seats will remain, though the AA layout already has 4 more seats than the US version with 4 fewer first class seats. Depending on the seat model chosen it should be possible to get 8/24/102 in the A319, upping the passenger count to 134 from the current max of 128 on the AA layout.

In-flight wifi on international flights is now a viable solution with several providers offering service. American had previously committed to offering connectivity on its new 777-300ER aircraft but not the rest of the fleet. The announcement this week extends that commitment to all of the carrier’s 787s, 777-200s and A330s. As the 767-300s and 757-200s receive their new cabin interiors they will also have satellite-based connectivity installed. The service American currently offers uses Ku-band satellite coverage from Panasonic and its eXConnect platform. Presumably the new installations will use the same.

And, fortunately for passengers, nearly every seat on a reconfigured plane will have access to a power port. This includes the retrofit A319s, 752s & 763s as well as all new deliveries moving forward.

The airport experience will see changes as well, with new kiosks being installed and updated airport lobby areas at many locations. More power points are also being added at gate areas to help travelers keep devices powered.

For lounges the announcement includes upgrades to the food offerings in the Admirals Clubs. Mentioned in the release are Greek yougrt and oatmeal for breakfast plus soups and desserts in the afternoon and evenings. New furnishings and upgraded beverage options are also mentioned, though there is certainly ambiguity in terms of what options will be paid versus complimentary in the lounges. There’s also the part where Fernand Fernandez, vice president of Global Marketing is quoted describing the lounge upgrades as somewhat revolutionary:

We invented the airport lounge and in 2015 customers can expect us to reinvent the lounge experience.

This misses that offerings like oatmeal and soups have been around for a while now amongst the competition. But it does make for a great sound-bite.

Keeping Up With the Andersons

I wish I could say there is something new and spectacular here. And certainly an announcement about cabin retrofits which doesn’t appear to include much in the way of cuts is a good thing (though the verdict is still out on the A319 layout). But most of these announcements really seem to be American simply trying to keep pace with Delta and United. It will be the end of 2016 before the business class lie-flat work is completed. That’s two more years of a product which is rather behind the times. And even when complete the selected option is only just keeping pace, not making a leap ahead. That’s not a problem, per se, but it also isn’t necessarily great news for travelers.

I suppose it is probably also worth pointing out that the international route network is still rather weak outside of South America, despite Parker’s claims to the contrary.