Where to sit (and not to sit!) on the Lufthansa...

by Seth Miller 11 years ago5 years ago

Having spent a decent amount of time on Lufthansa‘s 747-8i during the press events last week and also on the inaugural flight from Frankfurt to Dulles I’ve put together a quick guide on which seats are good and bad on board the aircraft. I’m sure others will disagree with me on some of the suggestions I’ve got, but I’m OK with that. The seat map images are taken from the published guide at Lufthansa.com. 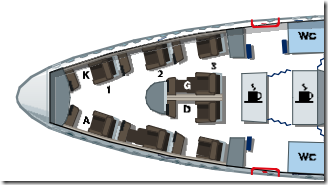 There isn’t really a bad seat in the nose of the 747-8i, but I’m quite partial to 1 A/K because of the nose curve. The D/G seat pair is a good option as a couple traveling together, though I’d still try for 1A/K.

Seat 3K, set up for the press demo: With 92 (apparently I cannot count) Business Class seats on the plane there are plenty to choose from, at least in theory. That said, there are definitely some which are more comfortable and spacious than others.

On the upper deck I like row 84 for the extra bit of space in front of the seats. There is still a hard bulkhead there, but if you stand up and are climbing out of the window you’re not actually grabbing another passenger’s seat for balance. Also on the upper deck there are decent sized overhead bins, though smaller than those on the main deck, and the side wall storage bins are available for window seat passengers. The seats are the same as those in the window pairs downstairs, slightly narrower an angle than the center pair downstairs, making it a bit more cozy with your seatmate. Finally, the upper deck is a tiny bit louder than the main deck. Not a ton and not enough to bother me at all, but it is.

On the main deck the center pairs are my preferred seats. The slightly wider angle provides a more spacious feeling and more space on the shared foot area. Plus, no climbing over neighbors. The proximity of rows 4, 9, 10 and 14 to lavs and galleys makes them rather less appealing overall. Row 14, in particular, is where the economy cabin lavs are so there is more traffic back there. The pasenger to lav ratio on the main deck is pretty rough, especially compared to upstairs. I didn’t see queuing when on the flight but I wasn’t sitting there the whole time so that’s not really a great measure.

Overall my choice would be upstairs, especially if you want a window seat anyways. If you’re going for an aisle the center column downstairs offers the benefits of slightly quieter and no climbing neighbor, at the expense of a worse lav ratio and slightly busier crew serving that area. 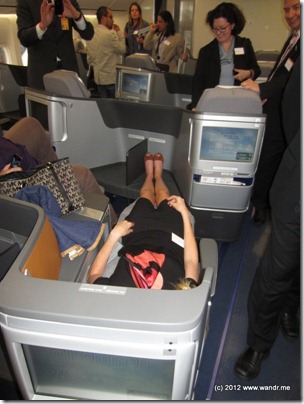 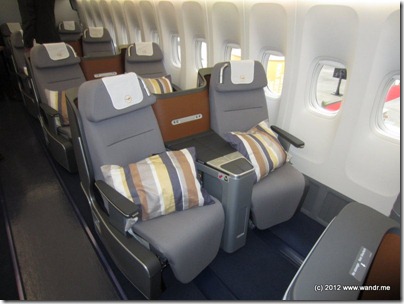 There are, by my count, only six very good seats in economy on the plane. The are the four seats in row 21 and 22 A/K. They have unlimited legroom and 22 A/K have a window with a decent view and can get in and out without bothering the folks also in their row. The drawback of these seats is typical of other bulkhead seats: tray/IFE in the arm rest and no underseat storage. Those are trade-offs I’m willing to make in exchange for the legroom. The downside of sitting in this area, particularly row 22, is the proximity to the lavs. Expect to see a lot of foot traffic in the area.

Next up in terms of decent seats are the bulkhead seats at 22 DEFG and 34. There is a bit of extra leg room but you cannot stretch your legs all the way forward. And, like the other bulkheads, fixed seat dividers. The bulkhead at row 34 is also the bassinet positions so there is a decent chance of babies there.

If you don’t mind being the last people off the plane and the last people to get meal service then the pairs at rows 45-47 have a lot of space on the fuselage side of the seats. That space isn’t supposed to be used during take-off and landing, but there is a lot of room there once in flight.

The IFE boxes sit at the outboard side of the seat mount brackets for the A, E and K columns. This slightly reduces foot space at those seats.

The other interesting foot space issue comes in the DEFG column of seats. There are four seats but still only two mount points to the floor. The vertical risers are roughly about a third of the way in to the E and F seats. This creates a situation where there are only three foot wells for the four passengers in that area. The E/F passengers will have to straddle the mounting riser and share partially with the D/G passengers. Because of the way the IFE box is mounted at the E seat that column ends up having the worst foot space of any of the coach seats.

There are a handful of overhead bin locations which have cabin equipment at them, making them unavailable for passenger use. The Sky Interior overheads mostly make that a non-issue in terms of accommodating all the cabin baggage, but still worth being aware of the following limited locations:

I sat in 31 D for most of the flight. I was quite fortunate that 31 E was unoccupied as that definitely helped things out. The four reasonably broad guys in the bulkhead at 22 didn’t look all that happy about their predicament, but they survived, too. More specific details of my in-flight experience on the Boeing 747-8i are here.

Economy is never a great seating experience and this is no exception, but it is definitely better than the old 744 setup and it was tolerable.

Seat 22A and unlimited legroom: 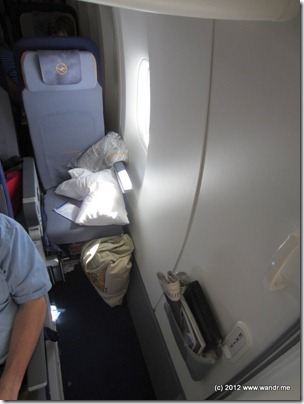 Storage space beside the pairs in the back: The under seat view of the center 4 (note the location of the IFE box and vertical mounts relative to the seat cushions):