Earlier this year Delta announced a bunch of changes in their SkyClub lounges, ranging from new menus choices to manicures and shoe shines. Different options were to be trialed at different lounges and some might actually stick around for the long term. The first of those “permanent” changes has been announced and, effective today, the lounges will have a new selection of free food. The version of the email announcement I received was focused on the BusinessElite market (likely a result of all those Boxing Day mistake fares I purchased) and the menu is impressive. At least to look at initially. 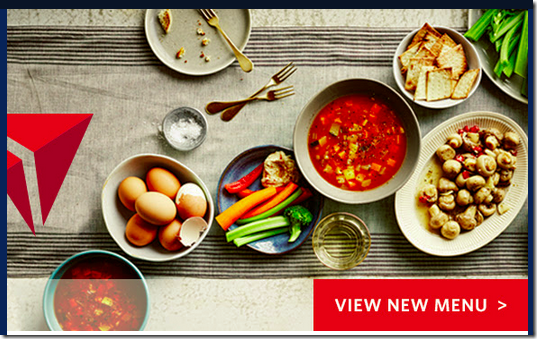 As I read it more closely, however, it appears that the main changes are:

There are lots of other things listed, of course, but they appear to mostly be the same things which the lounges have had for some time now such as yogurt in the morning and hummus, olives and veggie sticks in the afternoon.

It is not entirely clear the value of “local” bagels other than for the NYC lounges, for example. And, quite frankly, I cannot get over the dual meaning of the soup brand name. Are they trying to alienate their most frequent flyers by serving them soups meant for the mass market??!? 😉

Seriously, though, the menu changes are a nice upgrade for passengers. I wouldn’t go so far as to say that they are “premium” nor would I plan on making a meal out of the options. And I doubt it would skew my travel plans at all given how little time I spend in lounges these days anyways. But it is nice to see them trying to improve the product, even if most of the options remain pre-packaged, frozen or mass-produced.

Also, they’ve published the nutritional information for many of the items. Some of that scares me a little.