What’s old is new again. And for a couple of airlines keeping “ancient” commercial aircraft in service is part of a business plan that works surprisingly well. The frames are cheap to acquire and potentially offer unique characteristics that newer types are unable to deliver.

The 727 reached the end of its production life in 1984 and stopped flying for major US carriers 15 years ago. Only a few dozen remain in service around the world; only a pair of those carry passengers. But for cargo and government/military operations the type keeps soldiering on.

To that end, cargo carrier USA Jet Airlines just added a 727-200 to its fleet. The plane is in cargo configuration and flying services generally from the carrier’s base at Willow Run Airport in Ypsilanti, Michigan. The plane was delivered new by Boeing to American Airlines in August 1981 and flew passengers for 14 years. FedEx converted it to a freighter in 1995 and it remains in cargo service today. 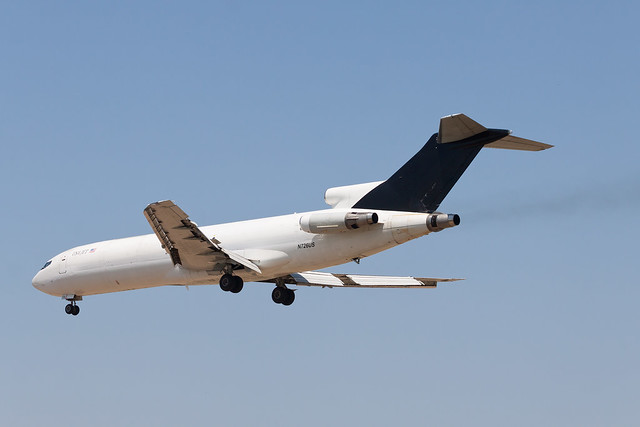 The second “new” aircraft of note is a 737-200, now flying for Canadian charter operator Chrono Aviation. It is the largest plane the group operates and, while not a “jumbo jet” as is stated in the press release, is a significant upgauge in size from the Dash-8 and King Air planes in Chrono’s fleet.

After acquiring a Dash 8, a private jet and a King Air 350 in the last two years, we felt we were ready for this pivotal moment. Our company is ready to shift gears and join the big leagues of aviation. Until recently, Chrono could carry up to 37 passengers or 8,000 pounds of passengers and cargo with its Dash 8. The 737 will meet our customers’ increasing demand and enable us to carry up to 119 passengers or 30,500 pounds of cargo. – Vincent Gagnon, President of Chrono Aviation

With all the talk about this-MAX and that-neo, it's nice to see a 737-200 entering service! This all-black Combi – equipped with a gravel kit – will fly charter ops for @ChronoAviation, to unimproved strips in Canada's North. #AvGeek HT @SkiesMag pic.twitter.com/vnWIjGS5hn

One key value proposition of the type for operations in Canada is its ability to operate to “unimproved” air fields in Canada’s remote north. The gravel kit is not generally seen on newer jets making the 737-200 with that option a strong offering to mining and oil firms bringing supplies and employees to remote sites.